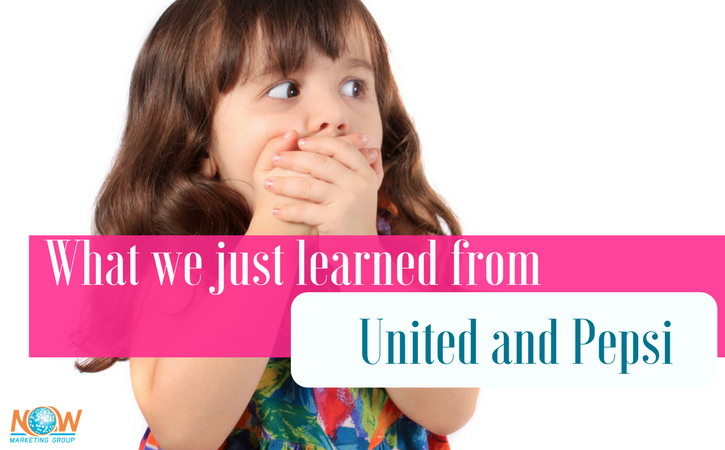 In under a week, United Airlines has become the new poster child for a complete brand catastrophe. Pepsi, too, has recently experienced a less-than-positive brouhaha regarding their recent marketing campaign. How these two companies acted - both during and after the events themselves - offers timeless lessons for operating a business in the 21st century.

First, let's review what happened. With United, employees instructed Chicago Department of Aviation officers to forcefully remove a paying customer from his airplane seat because the flight was overbooked. People saw a video of this bloodied man being dragged down the aisle of the plane. United's stock price dropped fast, but it seems the real, lasting damage will be to the brand name. The video of the incident has become the leading topic on Weibo, the Chinese version of Twitter, with over 100 million views. China is - was - one of the more critical growth markets for United. Since the incident, people have taken vows not to use the airline, and other stories of gross mistreatment have been aired.

Pepsi's ordeal was slightly subtler. Last week, Pepsi ran an advertisement based on a 1967 Vietnam war era picture where a woman hands an officer a flower. The new Pepsi ad featured a model walking through a crowd of protestors to the opposing line of police officers and handing a Pepsi to one of the officers. While the ad was creatively based on a famous photo, many younger viewers mistook it as a slap in the face of the Black Lives Matter movement. Pepsi pulled the ad in less than 24 hours.

In both instances, sites like Twitter and Facebook were responsible for the wildfire-like spread, resulting in outraged newscasts, dark humor memes and Saturday Night Live skits. For Pepsi, a full apology was expected. Pepsi acted quickly by being forthright and accepting their error with a legitimate apology. United, on the other hand, issued a statement a few days later that focused on the employees and belittled the violent removal with the phrase "re-accommodation". That statement caused additional backlash. Additional statements and an attempt by United to reach out to the passenger were too little, too late.

These incidents highlight the reality of how companies need to operate today. Here are five things you can learn from Pepsi and United's blunders.

People are always watching, and integrity is always key. Your audience has the power to destroy a brand nearly overnight; they did with United. Moreover, people can easily see through lies or phony comments, and they will call you out, as they did with the first response provided by United.

Employees are surrounded by people who can instantly record and broadcast their actions live on Facebook. Offline decisions by United resulted in an online PR nightmare. If you do not get the offline experience right, it will impact your online reputation for the worse.

3. Employees need to be empowered to make decisions

Employees must feel safe, and they must feel empowered to speak up when necessary. People who second-guessed the Pepsi ad should have spoken up. United flight attendants should have put a stop to the situation. Take note of their mistakes and make sure you let your employees know to both follow proper procedure and de-escalate situations on their own when things go awry.

4. How you respond to issues is more important than the issues themselves

In many cases, how you respond to an issue is much more important than the issue at hand. Pepsi did two things well: they responded immediately, and they responded with a genuine apology. People who are wronged wanted the other party to recognize how they feel, and apologize to them. Avoidance of the issue, a delay in a proper apology, or complete silence will only increase ire towards the company.

5. Invest now to save money later

In Pepsi's case, screening the ad prior to airing it nationwide may have helped them catch the possibility of it creating a firestorm. While doing so would cost more in terms of creating the ad and possibly scrapping it, it would have saved them the time, money and reputation lost as a result of airing the ad. In United's case, they likely could have avoided the incident simply by offering a higher incentive for another passenger to disembark.

The biggest lesson from these joint PR fiascos is that the expectation for companies to perform flawlessly is rising. United, of course, serves as the example of precisely what not to do - it appears to be an outdated company refusing to move towards the future. Pepsi showed an inkling of this when they made a statement about understanding and justice, even if it was not received as well as some had hoped. In order to thrive in the 21st century, a company must optimize its customer's offline experiences, empower its employees to make crucial decisions, invest in their personnel and processes to avoid mistakes, and work to fix things immediately when something goes wrong. If you aim to serve over sell, you will always come out on top.

65 Women in Digital You Should Be Following