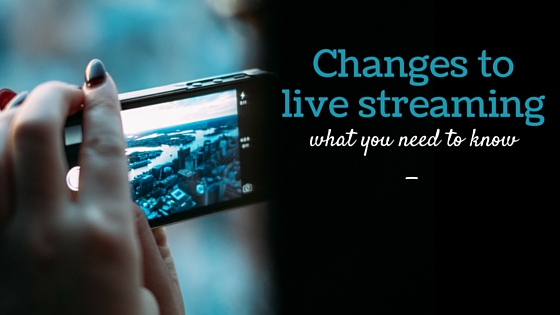 Video and live streaming have been the buzzwords of marketing for least a year. It’s something that has been changing and evolving, with platforms fading into popularity and others disappearing. Not only is it becoming important to embrace video, but it's also essential to stay ahead of trends.

Starting with Meerkat in 2015, other apps starting popping up shortly after. What sealed the deal is when Facebook jumped onboard with their own live streaming option. The largest social media network has now confirmed that live streaming will definitely be big. And while not always live video, many other social platforms have embraced video, including Instagram, Twitter, and Snapchat.

While it used to be that video needed a production team behind, now it’s much, much easier to record. Really, all you need is your smartphone! With just a click of a button, you can be live in front of your social audience, sharing stories and information in a way that many people want to digest it. Even private citizens have found fame using live streaming on Facebook and other apps. Just look at how successful Chewbacca Mom has been since sharing her glee online.

There are many options for creating and building your own live streaming presence. Introduced in March 2015, Meerkat developed and released a mobile phone app that allowed live streaming of video. It was quickly followed by Periscope, which is now owned by Twitter. Both of these initiated the trend of live streaming video and building audiences. In August 2015, Blab.Im was developed, and let multiple people host live shows while audiences interacted with comments. These were the big three, who started out the trend that Facebook soon joined in on. Luckily for Facebook, as the world's largest social media network, it already had the audience that smaller apps were lacking. Now, YouTube has launched live video as well.

The trend has begun and shows no sign of stopping anytime soon, and while some platforms have seemingly died, such as Blab and Meerkat, others continue to grow. And the vast majority of social media users are embracing this way of communication.

So, if you’re looking into live streaming did you need to be in all of those places? Everything depends on where your audience is. People will consume their content in the place that it’s easiest for them. Twitter remains popular in the 25 to 30 age range, while Facebook has a wide audience.

Also, you’ll want to think about how you will repurpose your video content later. The platform you choose will determine what you can do with your video. With Periscope video disappears in 24 hours. With Facebook, the video may disappear off of your audiences timeline in 24 hours, but it still lives on your feed and will reemerge if someone engages with it.

How to use live streaming based on the platform:

Having videos that follow one of the 4-E's can help it go a long way. Our 4-E Checklist: they need to educate, engage, expert or be entertaining.

We have a feeling that Facebook is once again going to emerge as top dog when it comes to live streaming. Very few people can compete with the searchability, usability, and ease of use that Facebook has developed in their live streams. Not only that, there are so many applications for live streaming through all your channels on Facebook. You can live stream on your business page, through your private groups, from a broad audience down to a select group of individuals. You can make announcements, provide answers to questions, have live Q&A’s, have guest speakers and interviewees. The possibilities are really endless.

We’ve been busy building our own live streaming show #MagnetMarketers. Join us every Tuesday afternoon at 4 p.m. E.S.T

The Best Apps For Digital Marketers in 2022