The Social Media Updates you need to know 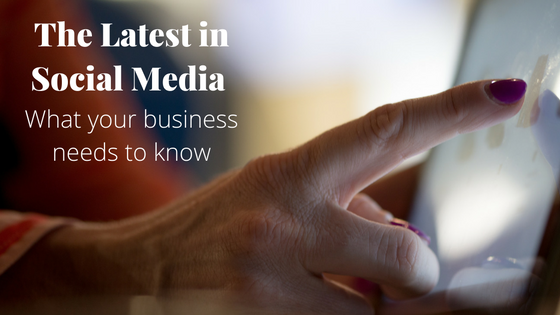 Throughout the last month, a lot has been happening on social media.

We understand it can be hard to keep up with the updates and changes that can affect your business. After all, you have a business to run. That’s why we’re here. We’ve been watching announcements so we can bring them to you. Check out some of the most talked about updates on social media below.

Google Hangouts On Air is ending in September. This is not to be confused with Google Hangouts, with one-to-one communication. Google Hangouts On Air was a service that allowed you to hang out on air and broadcast to many people. Now that it is shutting down, Google is turning their focus to YouTube Live, which was introduced earlier in the year. This just confirms that video and live streaming will continue to be a huge trend. Everyone is turning to live video, and the main reason is because it gets engagement.

Additionally, Google will be punishing mobile sites that have hard-to-dismiss pop-ups. Starting in January 2017, Google will be penalizing websites with annoying pop-ups. Pages with intrusive pop-ups will rank lower in search results. Luckily, the January deadline gives you plenty of time to update your site if you fall under the offender category.

Facebook continues to make changes and updates to their platform, rolling out exciting new features for everyone from live-streamers to parents.

They have recently announced some updates to their Facebook Live, with a snazzy new feature. We’ve been waiting for them to announce this for a while. Facebook Live will now be available for two-person broadcasts! Just another huge sign that live video is here to stay. For now, they are rolling this feature out to verified users, but eventually, everyone will have access to this feature.

And for the parents out there, Facebook has released a Scrapbook feature that allows you to organize photos of your children so they can viewed and shared with friends and family. Choose a unique tag for your child. Once you’ve used their tag in a photo, it will add them into a customizable scrapbook. Then photos can be easily shared with friends and your partner's friends.

Remember what Facebook was like back in 2004? Facebook's newest app, Lifestage, aims to bring some of that back to users 21 and under. The app is only available to high schoolers, similar to the original Facebook in 2004. Teens will fill out their profile entirely of video fields, letting them share a visual profile to share with their school network.

Lastly, Facebook Carousel Ads has doubled the number of photos and videos that can be added from five to 10.

Tired of all the spam and bots filling up your Twitter feed? You’re in luck because Twitter is working on making their newsfeed cleaner with a new filter. It will work as a tool that will hide notifications from bots and duplicate tweets from spammers. It may also work as a way to prevent online harassment from trolls, as a step before a full on account ban.

The latest buzz over at Instagram has been the recent release of Instagram Stories, a feature similar to Snapchat, which allows you to put together images and video clips for up to 10 seconds. Instagram already has a massive (and growing) user base, and this update is helping more people stay active on the platform, perusing just a little longer than they normally would.

One of the most exciting things happening lately on Pinterest is the engagement it is getting people’s blog. People are searching on Pinterest for information and finding blogs within Pinterest, which then leads them to read and engage with them. Compared to everything else, blogs are generating the most traffic. This is very exciting news!

You can also add YouTube Videos right into Pinterest and organize them very easily in boards, just the same as you would a photo or blog posts.

How To Use Google My Business To Drive Brand Awareness